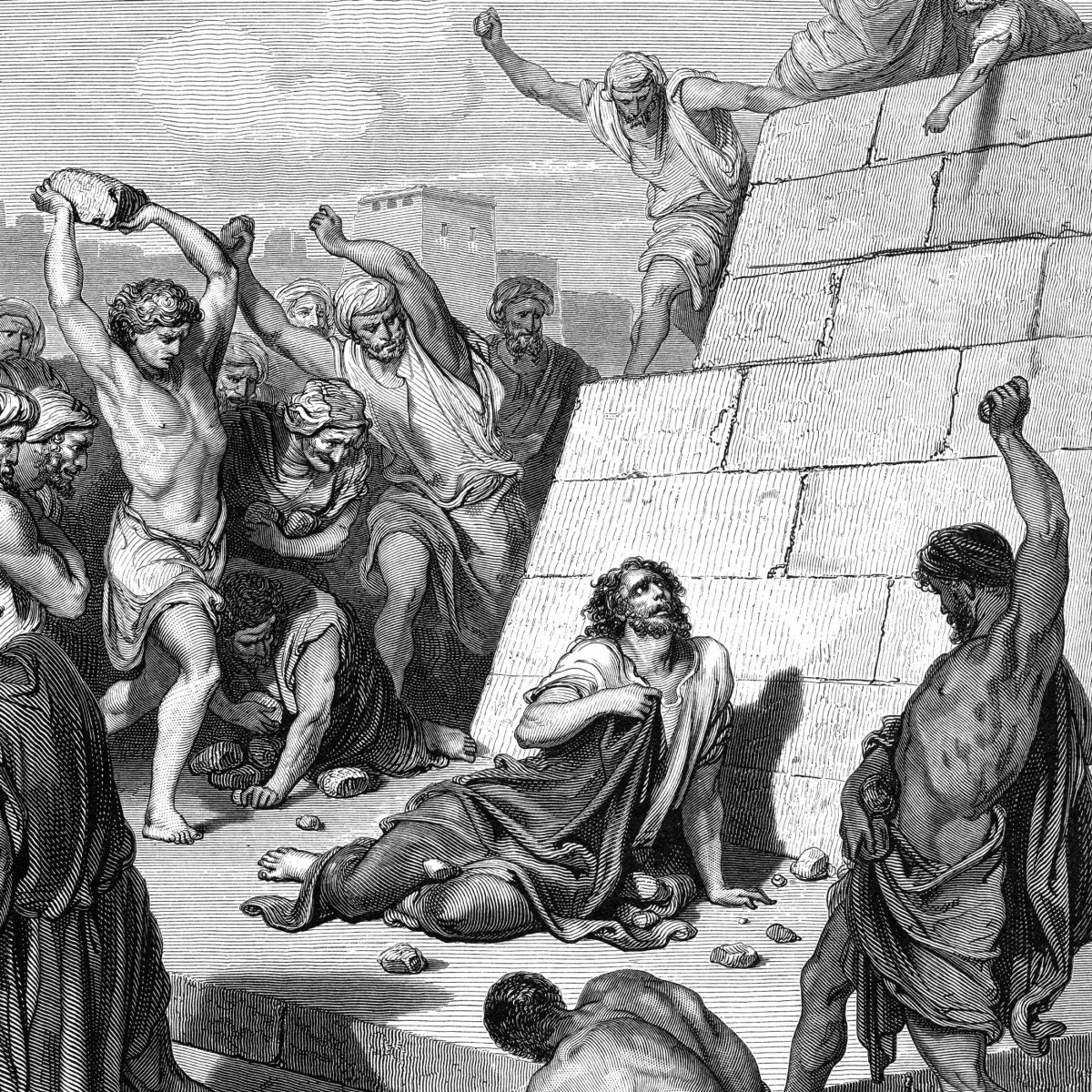 The synagogue in Antioch was in a state of pandemonium. A mob had formed. Lynching was on itsmind. Raised fists, stomping feet and cries of “blasphemy” had kicked up a cloud of dust, fury and deadlyintentions. In the midst of the mob stood one man — now quiet, almost peaceful, yet determined. The first rock hit Stephen. Suddenly, a barrage of boulders flew from the angry rabble. Within minutes, one of the leaders of the early church breathed his last.

A young Pharisee in the back nodded his head “in hearty agreement” (Acts 8:1). He began to gather the garments of the mob — returning them to their rightful owners. Saul was happy. Joyous. Another heretic had been exterminated. Judaism was being purified. Indeed, as Paul would later write of himself, “He was advancing in his faith” (Gal. 1:14). He believed he was doing right by persecuting a church that he thought to be false, foolish and far from God’s will.

How can it be that one like this could receive the “call” to become God’s minister to the very church he once persecuted? How could Saul the persecutor become Paul the servant of God?

Those who receive God’s call into the ministry today rarely claim such radical “Damascus Road” experiences. Yet, we can learn something of how God works to summon to divine service today from the many examples of “callings” — like that of Paul and others — which fill the Scriptures.

This article will briefly consider biblical illustrations of God’s call to ministry. One could take two approaches to this task. In a comprehensive and inductive fashion, one could examine key “callings” one by one throughout the Scriptures. But such an exhaustive study could prove scattered and, well, exhausting.

The tact I shall take is more synchronic and systematic. In other words, I will examine general and enduring principles gleaned from how God works in most “callings” throughout the Scriptures.

One caution is in order as I begin my survey. One should avoid making one-to-one correspondences between Old Testament prophets and New Testament apostles with modern day God-called ministers and preachers. While overlap exists between the modern and ancient, there is also dissonance. So, for instance, while the prophets and apostles often received visionary and verbal calls from God the Father or Christ Himself, such is not the norm today. In addition, God chose the apostles and prophets to serve a specific function in salvation history. Today, we are at a different stage in salvation history and have different offices to serve the church.

Still, God does call in the Bible in a way that is consistent with today. And we can learn much fromthe general principles derived from these biblical illustrations. While there undoubtedly could be more, the following will present ten such principles.

First, the call of God to minister goes to all Christians, but God commissions some for special service.

The church in America has largely professionalized the ministry — misunderstanding servants and equippers as those we pay to do the work of the ministry for us. Tithes have become remuneration for services rendered, and sideline Christians have ignored the very clear teaching for all who have experienced salvation to obey the Great Commission. Every-member ministry needs recovery.

Still, Scripture clearly demonstrates that some receive a special calling to serve God in a more consuming fashion — as “workers in His harvest” (Matt. 9:38). This principle is evident from the beginning of God’s salvation history. For instance, though all Israelites were to participate in the national missional goal of being a “light to the nations” (Isaiah 42:6), God called the prophets, priests, and especially the Davidic kings to lead in this illuminative effort. And though Jesus called all His followers to “go therefore and make disciples” (Matt. 28:19), Paul asserts that God “gave” specific roles to some in service of those disciples (Eph. 4:11).

The church’s role in the process is to set persons apart “for the work which I [God] have called them” —as with Paul and Barnabas (Acts 13:2).

Second, the call of God has no vocational or experiential prerequisites.

As the editor of my seminary’s newspaper for several years, I had the opportunity to interview many fellow classmates about their testimonies. The array of past experiences was astonishing. I wrote stories about a former performer for World Championship Wrestling who gave into God’s call after rasslin’ with it for years. A power company worker was literally shocked into the ministry after grabbing a live cable. There were former firefighters and pharmacists, drug dealers and doctors, schoolteachers and soldiers, bikers and bankers, even a hippie and a harpist.

Scriptures attest to a similar variety among the called. Among the prophets, Amos was a farmer, Ezekiel a priest, Jonah, well, a runner! Of course, perhaps the greatest examples of this principle are the Twelve. A revolutionary Zealot, a reviled tax collector, regular-guy fishermen? These aren’t necessarily search-committee material.

Why does God work this way? Paul in 1 Corinthians 1 gives an indication. God uses “the things that are not” to shame the things that are (1 Cor. 1:28). Such variety also demonstrates that you do not need remarkable gifts or extensive previous experience. If anything, the prerequisites seem to have more to do with your character — as shown in the qualifications lists of 1 Timothy 3 and Titus 1.

Amazingly, many times, the Scriptures are completely silent about the past lives of the called. This is especially true of the prophets, like Joel and Obadiah, who appear as nothing more than voices for the Divine. The focus becomes the message and the subject of the message (God), not the messenger.

This does not mean that we are to put our past out of sight and out of mind. Indeed, God often uses these experiences providentially to communicate His message. For instance, Isaiah’s status as a relative of the king gave him access to the throne at crucial moments in Judah’s history — particularly when the mighty Assyrians laid siege to Jerusalem in the late 700s BC. Ezekiel’s past as a priest gave him significant insight into the corruption of Judah’s religious leadership. Paul’s experience as a Pharisee gave him extensive knowledge of the Old Testament, on which he based much of his gospel proclamation.

Third, the call of God can come at any stage in life.

Graduate programs in ministry today are a melting pot of characters, coming from all stages of life. I can remember graduates walking across the stage to receive their divinity degrees who appeared too young to drive, much less lead a church; others had received an Abrahamic call at an advanced age. God’s call is not restricted to the very young. Indeed, my Ph.D. supervisor — the man who made more of an impact on my life than anyone — did not receive his Ph.D. until age 40.

Scriptural examples validate this principle. Of course, there are the stalwarts of the senior circuit, Abraham and Moses. On the other hand, timid Timothy and junior Jeremiah seem to have entered God’s service early in life. Again, the variety of life experiences are all part of God’s providential equipping of individuals for their specific roles within the Kingdom.

Fourth, the call of God requires a commissioning from God Himself.

A former professor of mine used to say that you can no more send yourself into the ministry than you can send yourself to China as an official ambassador from the U.S. Every person must receive some kind of commissioning from God Himself.

Our experience will differ from that of the prophets and apostles who often received visionary experiences of  God and His glory as part of their calling (like Moses, Isaiah, Ezekiel, and Paul). Still, what we do receive — such as the confirmation of church elders and the internal assurance of the Spirit that leads to a holy aspiration for the ministry — is clearly God-given. Like the prophets and apostles, such a commissioning gives confidence and authority and even definition to one’s ministry.